Abortion in US: AOC calls for impeachment of Judges Kavanaugh and Gorsuch - Bark Sedov
Skip to content
August 14, 2022

After the Supreme Court overturned the landmark ruling on abortion rights, US politicians raised serious allegations against two judges. The lawyers are said to have lied under oath during their hearings. Calls for impeachment grow louder.

The overturning of the landmark judgment in Roe v. Wade on abortion rights by the Supreme Court continues to rock the United States. The Supreme Court itself is also affected. According to a recent Gallup poll, just 25 percent of Americans said they had trust or a lot of trust in the country’s authoritative court – the lowest level in around half a century. As for confirmation, serious allegations are now being made against two of the Supreme Court judges. Conservative lawyers Neil Gorsuch and Brett Kavanaugh are due to speak out on their position on Roe v. Wade lied – and under oath.

If this is confirmed, an impeachment of the two should be “very seriously considered”, demanded the controversial Democratic congresswoman Alexandria Ocasio-Cortez (AOC) from New York on the TV channel NBC. There would be far-reaching ramifications “if we allow Supreme Court nominees to lie under oath to secure lifetime appointments to the nation’s highest court and then (…) issue judgments that profoundly undermine the human rights of the majority of Americans “, continued Ocasio-Cortez.

Kavanaugh and Gorsuch, both appointed by ex-President Donald Trump, are among the five conservative judges, along with Amy Coney Barrett, Clarence Thomas and Samuel Alito, who overturned the Roe vs. Wade verdict by a majority last Friday. Both Republican Senator Susan Collins (Maine) and Democratic Senator Joe Manchin from West Virginia, who frequently disagrees with his party’s policies, stressed over the weekend that the Roe vs. Wade decision did not align with Kavanaugh and Gorsuch’s statements agreed in the hearings. “I trusted Justices Gorsuch and Justices Kavanaugh when they testified under oath that they believed Roe v. Wade set a crucial precedent.” Collins added that in the hearings and also in personal meetings, the two lawyers had emphasized the “importance of supporting long-standing precedents”. Both Collins and Manchin said they felt misled by the judges.

For some it makes you cry, others pop the cork: This is how US citizens reacted to the Supreme Court’s verdict 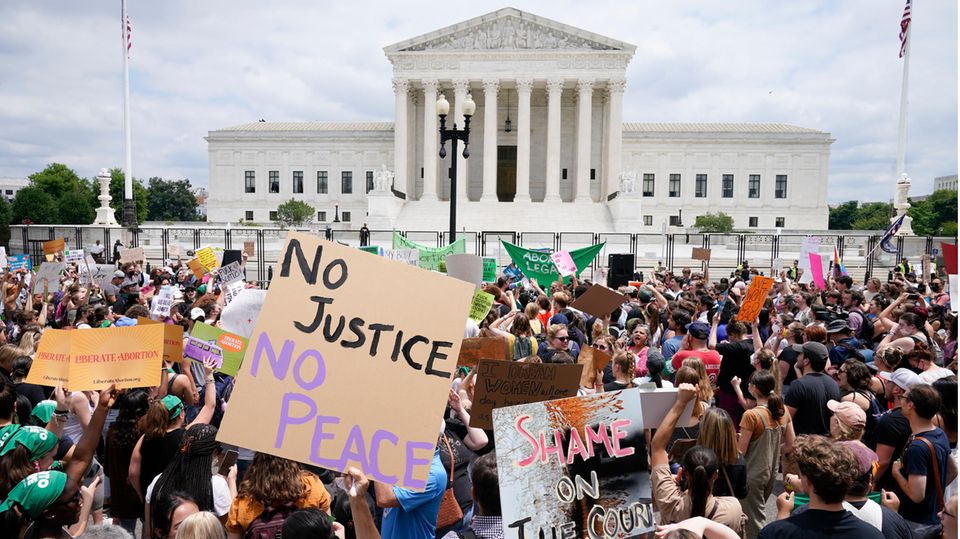 Ocasio-Cortez called the statements of the two senators “explosive” – ​​whereby she immediately classified her party friend Manchin in the conservative camp due to his often deviating attitude. “The Supreme Court has dramatically exceeded its authority,” AOC fumed on NBC, noting, “This is a legitimacy crisis.” The Democratic Senator from Massachusetts, Elizabeth Warren, had previously expressed a similar view. According to surveys, around 80 percent of Americans are against a comprehensive ban on abortion. For the arch-conservative pro-life movement, the repeal of Roe v. Wade, on the other hand, a victory after decades of struggle.

So far only one impeachment against Supreme Court judges

Ocasio-Cortez called the decision “deeply destabilizing” and a “hostile takeover of our democratic institutions.” “I believe lying under oath is a criminal offense,” said the New York congresswoman, “it’s something that should be considered very seriously, even by senators like Joe Manchin and Susan Collins.”

Abortion law in the United States

Biden is not defeated. But what can he do?

It remains to be seen whether the allegations will actually go so far that formal impeachment proceedings can be instituted against Kavanaugh and Gorsuch. So far, there has only been one case of impeachment against a Supreme Court judge – and that was a very long time ago. On March 6, 1804, a special committee appointed two months earlier recommended to the House of Representatives that Deputy Supreme Court Justice Samuel Chase be impeached—although all charges related to alleged misconduct in lower courts. Chase was ultimately acquitted of all charges by the Senate on March 1, 1805. One of the ways Chase defended himself was that his actions were in compliance with precedents. So cases like Roe v. Calf.