Amnesty chief apologizes for speaking on behalf of Jews

Amnesty International’s US director Paul O’Brien said he regrets “representing the views of the Jewish people” after previously saying his organization opposes Israel continuing to exist as a Jewish state.

According to Jewish Insider, O’Brien apologized in a letter to the Jewish House Democrats after they expressed concern over O’Brien’s remarks in a rare show of unanimity.

O’Brien was quoted by the Jewish Insider as saying at a luncheon with the Women’s National Democratic Club in Washington that his “gut tells me that the Jewish people of this country want to know that there is a place of refuge that is a safe and… sustainable place is the Jews, the Jewish people can call home” and Amnesty is “against the idea … that Israel should be preserved as a state for the Jewish people”.

“As Jewish members of the House of Representatives, we hold different views on a number of issues relating to Israel. However, we fully agree that Mr. [Paul] O’Brien’s condescending attempt to speak on behalf of the American Jewish community is alarming and deeply offensive,” the statement said.

In his March 25 response to House Democrats, O’Brien wrote: “During the event and several times during the presentation, I have stated that Amnesty takes no position on the legitimacy or existence of any state, including Israel. We have worked with the Israeli government for decades to honor their human rights obligations, and we will continue to do so. In my remarks to the journalist after the event, I expressed our concern about Israel’s 2018 nation-state law, which explicitly denies the right to self-determination.”

Amnesty International UK has come under fire from both Israel and US Jews over a report accusing Israel of the “crime against humanity of apartheid”. https://t.co/JBwBBcaMDa

However, O’Brien went on to defend Amnesty’s February report accusing Israel of apartheid, an outrageous report that has since been repeatedly discredited, even by Amnesty’s own Israel director, who described it as a “blow in the pit of the stomach”.

Agnes Callamard, Amnesty Secretary-General, wrote in a separate response to House Democrats that Amnesty “recognises the right of the Jewish people to self-determination” but “takes no position on the international political or legal arrangements that might be adopted to implement that right.” “ 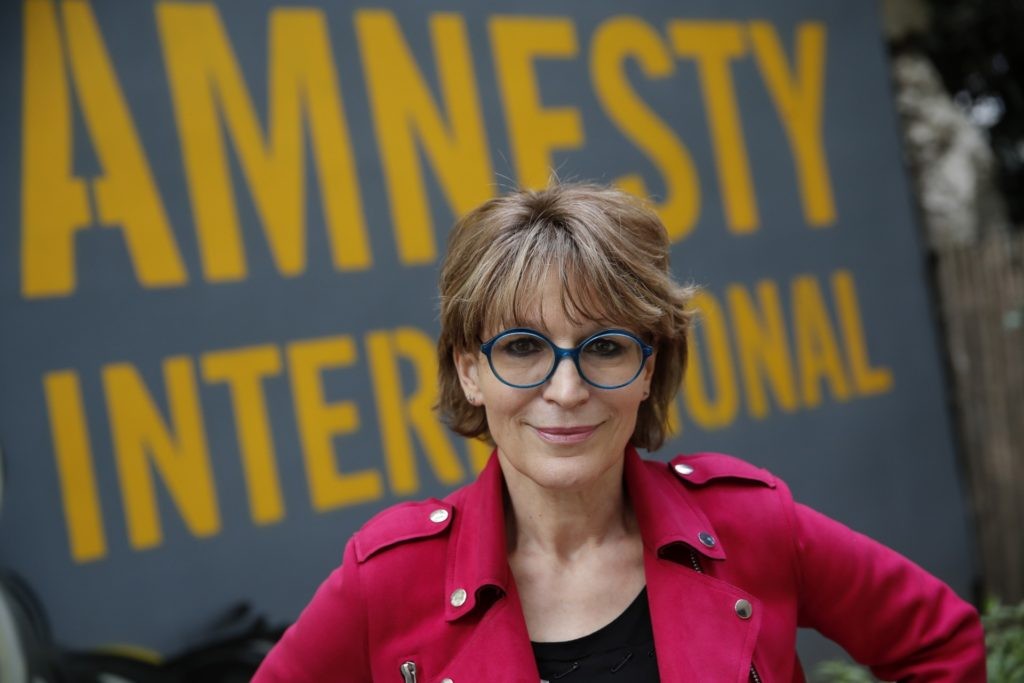 File/Agnes Callamard: “Amnesty “recognizes the right of the Jewish people to self-determination,” but “does not comment on the international political or legal agreements that might be adopted to implement that right.” (AP Photo/Christophe Ena)

“We have reaffirmed, also in connection with the publication of our report on apartheid, that there is nothing under international law that prevents the State of Israel from identifying as Jewish, so long as the government does not discriminate against its citizens on these grounds of religion or race,” she said.

Pro-Israel advocates took to Twitter to criticize O’Brien for the apology.

“Apology not accepted @dpaulobrien,” tweeted Michael Dickson, executive director of StandWithUs Israel. “The mask slipped and your true colors were revealed. The actions and slanders of you and @AgnesCallamard will make Jews less safe and will not help the cause of peace one bit. This will remain your legacy and that of the discredited @amnesty.”

apology not accepted @dpaulobrien. The mask slipped and your true colors showed. The actions and defamation by you and @Agnes Callamard will make the Jews less secure and will not help the cause of peace one bit. That will remain yours and the discredited @Amnesty‘s legacy. pic.twitter.com/SqRgadIltB

Human rights attorney Arsen Ostrovsky, who heads the International Legal Forum, also tweeted that O’Brien essentially said, “I’m sorry if my hatred of Jews, my arrogance and my calls for the destruction of the Jewish state hurt your feelings.”

shorter @dpaulobrien @amnestyusa: I am sorry if my hatred of Jews, my arrogance and my calls for the destruction of the Jewish state hurt your feelings.https://t.co/dYb20uUKSU