In 2016, a hydrogen and oxygen explosion at the University of Hawaii at Manoa shocked the scientific world after it resulted in a postdoc losing her arm and eventually suing the university, her supervisor and others for being provided with equipment and materials was that were inappropriate and unsafe.

But the Hawaii incident was not an isolated one, and serious accidents continue to happen around the world. In mainland China alone, there were 110 publicly reported accidents in laboratories between 2000 and 2019, a new analysis has found. Data for the rest of the world remain scarce.

The authors of the new study scoured media reports and government websites, looking for details on laboratory accidents that have occurred in China since 2000. Around 80 percent of reported accidents, deaths and injuries are due to fires and explosions or exposure to hazardous chemicals, according to analysis. The study authors say inadequate laboratory safety training for students is to blame, but say the trend has improved, with fewer incidents in recent years. 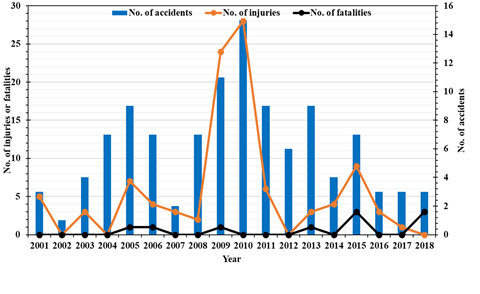 Among the 110 accidents analyzed, violation of laboratory procedures is a leading cause of such incidents in China, according to the study, where laboratory safety rules have been put in place but not enforced in many cases. Other reasons for laboratory accidents included the use of defective equipment, operator error, hazardous chemicals, and lack of supervision.

“That’s unacceptable in my eyes,” says Imke Schroder, a research project leader at the Center for Laboratory Safety at the University of California, Los Angeles (UCLA), which was founded in March 2011 after a 2008 pyrophoric substance incident led to the death of research associate Sheri Sangji. “The infrastructure at the Chinese universities seems to be really below average compared to here in the US and also to British and other European universities.” 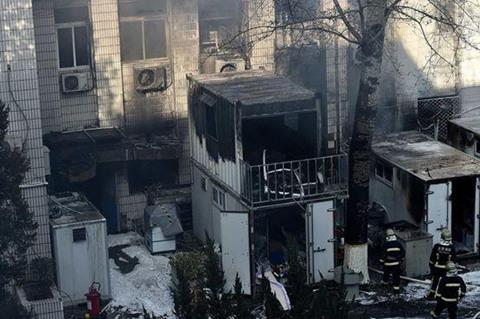 In 2009 and 2010, there was a spike in the number of injuries due to two major incidents in which several people were injured, the study found. One was due to a fire that broke out at the Chinese Academy of Sciences in 2009 and resulted in 10 people being treated after inhaling chlorine. Second, in 2010, a gas cylinder exploded at the Liaoning University of Petroleum and Chemical Technology in Fushun, injuring 20 people. 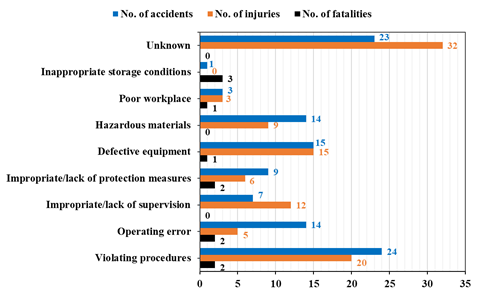 The study shows at least 10 people have died and 102 been injured in laboratory accidents in China over the past two decades, but experts warn the number could be significantly higher.

“There is no government database of laboratory accidents,” notes study co-author Yi Liu, a chemical engineer at China University of Petroleum in Shandong, calling this a limitation of the study. Liu points to the US Chemical Safety and Hazard Investigations Board (CSB) as an example of a government agency responsible for investigating and prosecuting such incidents. Since its inception in 1998, the agency has issued more than 850 recommendations to improve safety in various areas. 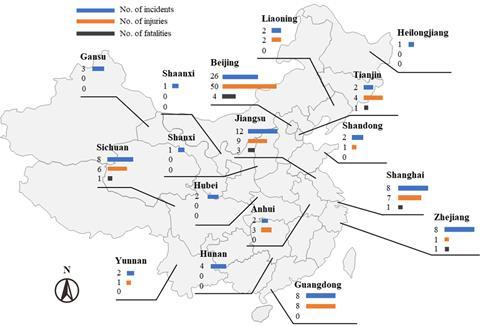 For Liu, reports from bodies like the CSB play a key role in learning lab safety lessons and avoiding making the same mistakes twice. That’s especially important because most accidents appear to have a human component, the study notes. “All accidents are preventable,” says Liu.

The status quo of laboratory safety in the US doesn’t place enough emphasis on risk assessments, says Schroder. The UK is a little more advanced, as academic researchers have to go through a more formalized risk assessment system when an experimental procedure changes, she notes, and use forms to ensure the risks associated with the hazards are controlled. “That’s not necessarily what’s been done in the United States yet, and I think that’s a real problem.”

Craig Merlic, an organic chemist and director of UCLA’s Center for Laboratory Safety, says Liu’s study “appears to make the mistake of blaming the victim.” Instead, he argues, better thought needs to be given to what can be done to prevent such incidents in the future. “Good science is science well done and science well done is certainly science done.”

The paper also doesn’t make it clear what qualifies as an injury, Merlic adds, noting that even at UCLA, the only incidents recorded require someone to seek medical attention or go to a hospital. Near misses are not recorded.

Merlic concedes that collecting data on this topic is difficult as the only accidents that make the headlines are usually the big ones or those resulting in one fatality. “I’m sure there are thousands of incidents that matter, but they’re missing.”

According to Merlic, some industries are leading the way by becoming stricter about reporting laboratory incidents and then actively trying to prevent similar incidents in the future. He notes that these companies record even minor injuries like small cuts of glassware.

Merlic adds that cultures differ from country to country when it comes to injuries, accidents and safety. He notes that academic research in China has skyrocketed, with enrollment for doctoral students in science, engineering, medicine and agriculture soaring from around 90,000 in 2000 to around 5.3 million in 2019.

“This is incredible,” he says, noting that lab security has had a hard time keeping up. “Such growth is not possible without growing pains.” But there is no comparable data between academic and industrial laboratories or between different countries, says Merlic.

Still, China appears to be lagging behind the US when it comes to laboratory safety, says Samuella Sigmann, a retired chemical safety instructor in North Carolina. A turning point in the US came after a serious incident in 2010 at Texas Tech University that resulted in a graduate student losing three fingers, burning his face and hands and injuring an eye, she says.

In response to the CSB’s recommendation, the American Chemical Society’s (ACS) Center for Lab Safety produced guidance in 2015 that describes methods for evaluating and evaluating hazards. Sigmann, who was a member of the ACS committee that developed the guidelines, notes that the new study suggests China is heading toward more regulation and safety rules as the US moves toward an environment where researchers thrive on knowledge better protect and empower.

In the US, for example, graduate students support each other in peer-to-peer workshops on lab safety, says Sigmann. “This problem cannot be solved simply by regulation or training,” she adds. “We’re trying to get people to go from that mindset of following rules to determining risk.”

Working with the ACS, Sigmann and other safety experts have developed a free 15-hour e-learning course on laboratory safety that has been running for about a year. About half of the roughly 1,000 people who have completed the course so far are PhD students based in India, she says, where some professors have ordered their students to complete the course to earn their degree. “India is another country experiencing serious incidents and which appears to be lagging behind in the education and training of its research chemists.”

Ultimately, Merlic believes that the root cause of the global problem is a lack of commitment from senior institutional leadership to consider security as an important and integral part of university design.

Merlic commends China for recognizing the problem and starting work to address it. He was part of the team that investigated the 2016 Hawaii incident and provided detailed reports on the hydrogen/oxygen explosion and the Texas Tech explosion. Merlic notes that these explosions and the 2008 Sangji case at UCLA were all the result of a failure to properly scale up the reactions.

That’s important because if something goes wrong when experimenting with large amounts of dangerous substances, the risks can be enormous, says Merlic. “The dangers of going from small to larger scale are not sufficiently recognized.”

As gas prices rose, so did the hunt for electric vehicles

See how three planets, two stars and the moon share the night sky on April 9, 2022