Carrie Lam, the massively unpopular chief executive of the Beijing-controlled Hong Kong government, announced Monday morning that she will not run for a second five-year term in May.

According to China’s state-run Global Times, Lam, 64, has privately told the regime in Beijing that she will not seek a second term as early as March 2021. Her public reason for stepping down was to spend more time with her family.

“I will end my five-year term as chief executive officer on June 30 of this year, and I will also end my 42 years of public service,” Lam said told a press conference on Monday.

“There’s only one consideration and that’s family,” she said. “They think it’s time for me to go home.”

For family reasons #Hong Kong CE Carrie Lam announced that she will not be running in the next CE elections. She says her upcoming work involves fighting #COVID-19, celebrating the anniversary of HK’s return to the motherland and a smooth handover. https://t.co/f5J8RUN9h3

Lam complained that she had spent much of her tenure under “unprecedented and tremendous pressure” from “foreign forces,” including the 2019 protest movement that the Chinese communist government claims was orchestrated by Western powers. She said “the unwavering support of the central authorities behind me” helped her move on.

While Chinese state media gave Lam a gentle pat on the head for her loyal service, a BBC Commentary condemned her as a weak-willed and unpopular leader who helped the Chinese Communist Party crush what remained of freedom, democracy and autonomy in Hong Kong:

She took over, like no other, a part of China that tolerated dissent, with a free press and an independent judiciary.

During her reign, Hong Kong became a place of state repression where political opposition was wiped out.

Now you can be jailed for singing certain songs, wearing t-shirts with slogans, or suggesting others light candles at home in protest.

Lam’s decisions exacerbated the unrest of 2019 at every turn, from igniting the protest movement by pushing for an unpopular extradition bill that Hong Kongers saw as an attack on their autonomy, to clumsy efforts to quell the protests with brutal police action. 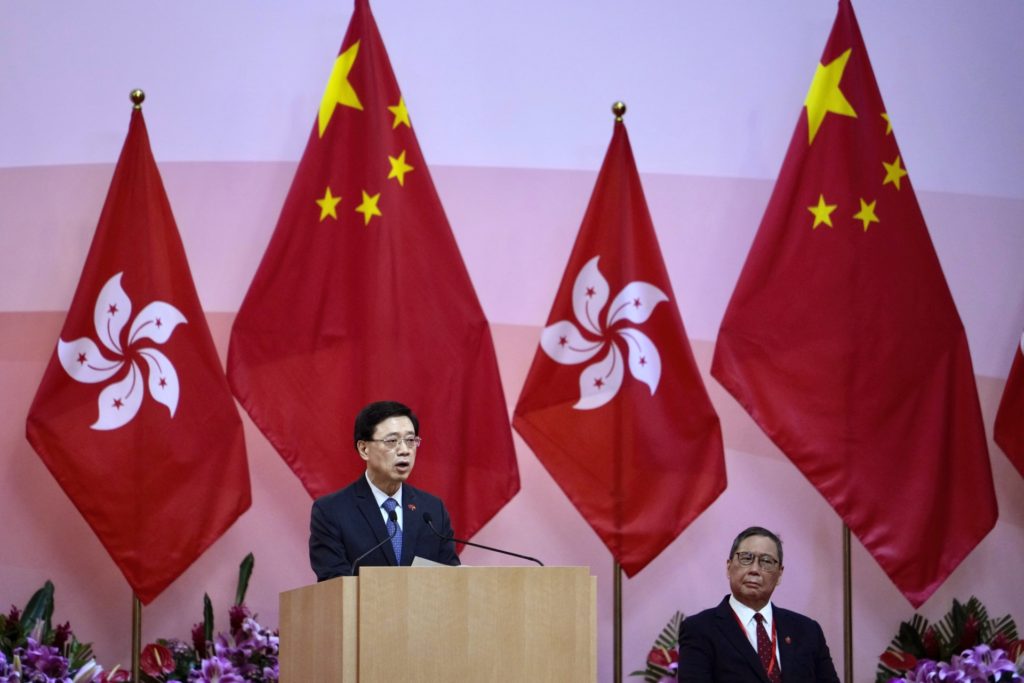 Lam was one of 11 people sanctioned by the US Treasury Department in August 2020 for “undermining Hong Kong’s autonomy and restricting Hong Kong citizens’ freedom of expression and association”.

The Treasury Department order singled out Lam for her role in implementing the authoritarian “national security law” imposed by Beijing to quell the protest movement. Ironically, many observers believe the outrageous national security law was imposed by the tyrannical central government because it had lost faith in Lam’s ability to maintain order.

Lam also departs amid a cloud of controversy over Hong Kong’s response to the coronavirus pandemic that has emerged of late degenerate in China’s worst (admitted) outbreak since 2020.

Beijing effectively took the coronavirus response out of Lam’s hands last month, dispatching a swarm of health workers and technicians to Hong Kong after Lam backed away from quarantines, mass testing and aggressive social distancing measures. Like the rest of China, Hong Kong has a low vaccination rate among elderly patients, resulting in a high mortality rate for the densely populated city.

the United Kingdom Guardian recalled that Lam began her public service career in the 1980s with a reputation as a “good fighter” who loved bureaucratic battles. By 2019, in tearful interviews, she begged Hong Kongers not to view her as a “sellout” or “puppet” of Beijing.

“Her tenure was marked by numerous missteps that show how far removed she is from the population and how little she cares about their concerns. Time and time again, she failed to stand up for Hong Kong’s interests or defend the city in any way,” said Hong Kong expert Louisa Lim Guardian.

The way Lam was promoted to the top job in Beijing’s command in 2017 by Hong Kong’s number two official is how most observers see it expect current number two, John Lee, will take Lam’s place in May.

Hong Kong’s leader will not be elected by the people – direct elections were one of the demands of the pro-democracy movement in 2019, which were vigorously rejected. Instead, only the “votes” of the Communist Party-controlled 1,463-strong “electoral committee” are counted. Former security chief Lee is reportedly forming a team to “run” for the office.

‘Sheer brutality’: Ukraine finds half-burned civilians in mass graves shot ‘in the back of the head’

Moment of shock at the CHIO: German rider crashes into the obstacle with Messi