Without prior notice and without any previous leaks, LEGO has just surprisingly presented a large, exclusive LEGO Super Mario set: With the set number 71411, “the mighty Bowser” will appear in the LEGO online shop in October, where the set has just been listed with all the pictures! We also want to introduce you to the huge LEGO Bowser here.

The set will be released from October 1initially probably exclusively in the LEGO online shop at a price of 269.99 euros. The set should also be available in stores a little later, which is why the huge Bowser statue should be able to be ordered at a discount at some point. As soon as we know an exact date for the start of retail sales, we will add it here.

General information about the “Mighty Bowser”

“The Mighty Bowser” wears them Set number 71411 and consists of total 2807 parts. The statue depicts Bowser overall 29 cm high is standing on a pedestal, which in turn measures 29 cm in width. The RRP will be at 269.99 euros lie, whereby the set is presumably indirectly affected by the price increase and should actually have been released for a significantly lower price.

But who is actually Bowser? Pretty much every one of you who has played a Mario game knows him as a notorious princess kidnapper. He always manages to get Princess Peach or the whole Mushroom Kingdom under his control, and Mario’s (and Luigi’s) goal is then usually to defeat him and free them again. So Bowser can rightly be described as Mario’s archenemy, although this enmity is usually portrayed in the games in a child-friendly way with a lot of humor and ironic exaggeration.

Bowser appeared (and still appears) in almost every Mario game, including the Mario Kart series. Like his minions, the Koopas, whose leader he is, he wears a turtle-like shell on his back, but is “slightly” larger and stronger than this, which is why the direct confrontation with him in the games is mostly in a more or less epic Boss fight culminates.

In addition to his other impressive physical attributes, Bowser has the ability to breathe fire, which is also reflected in the LEGO model. 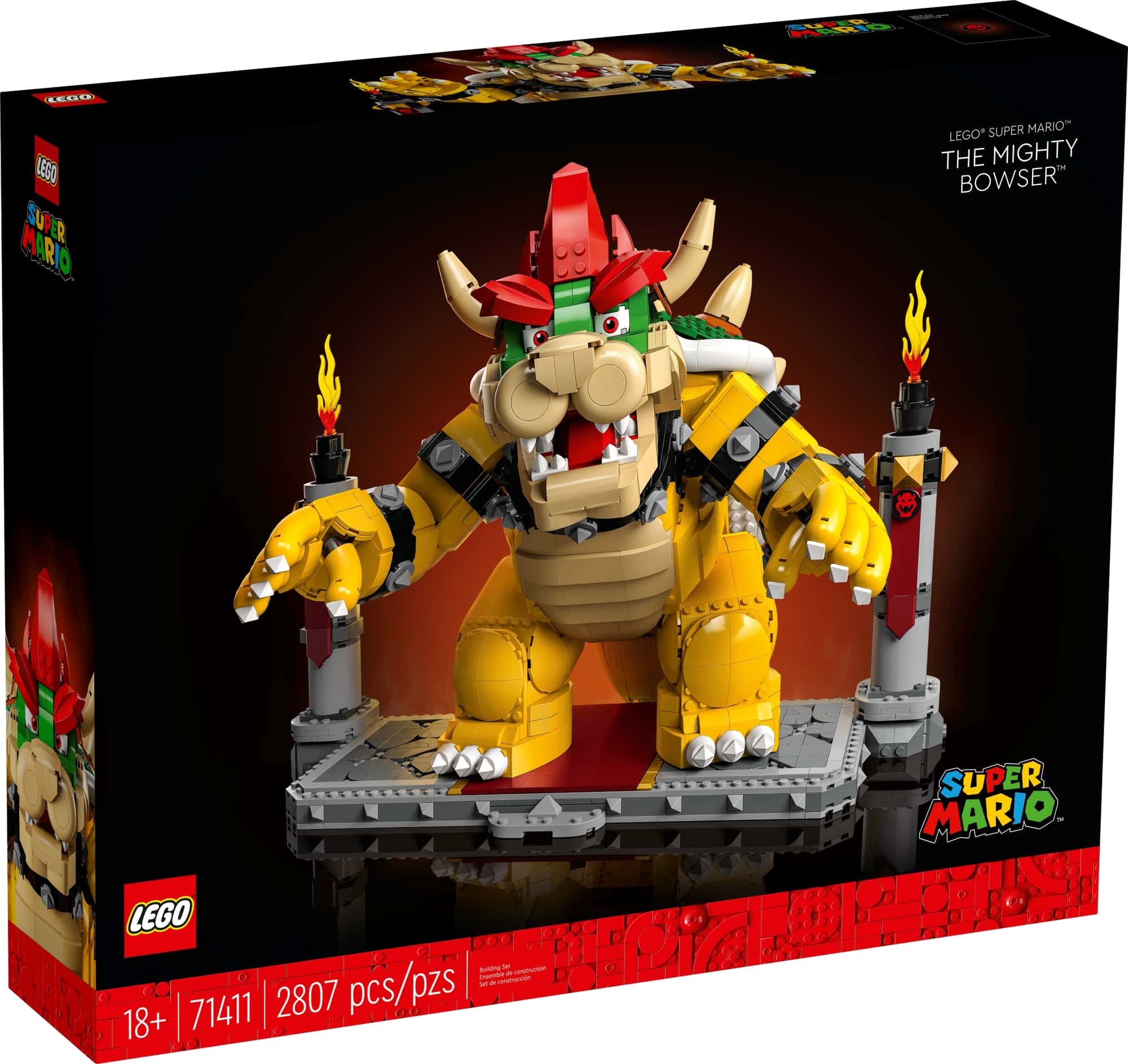 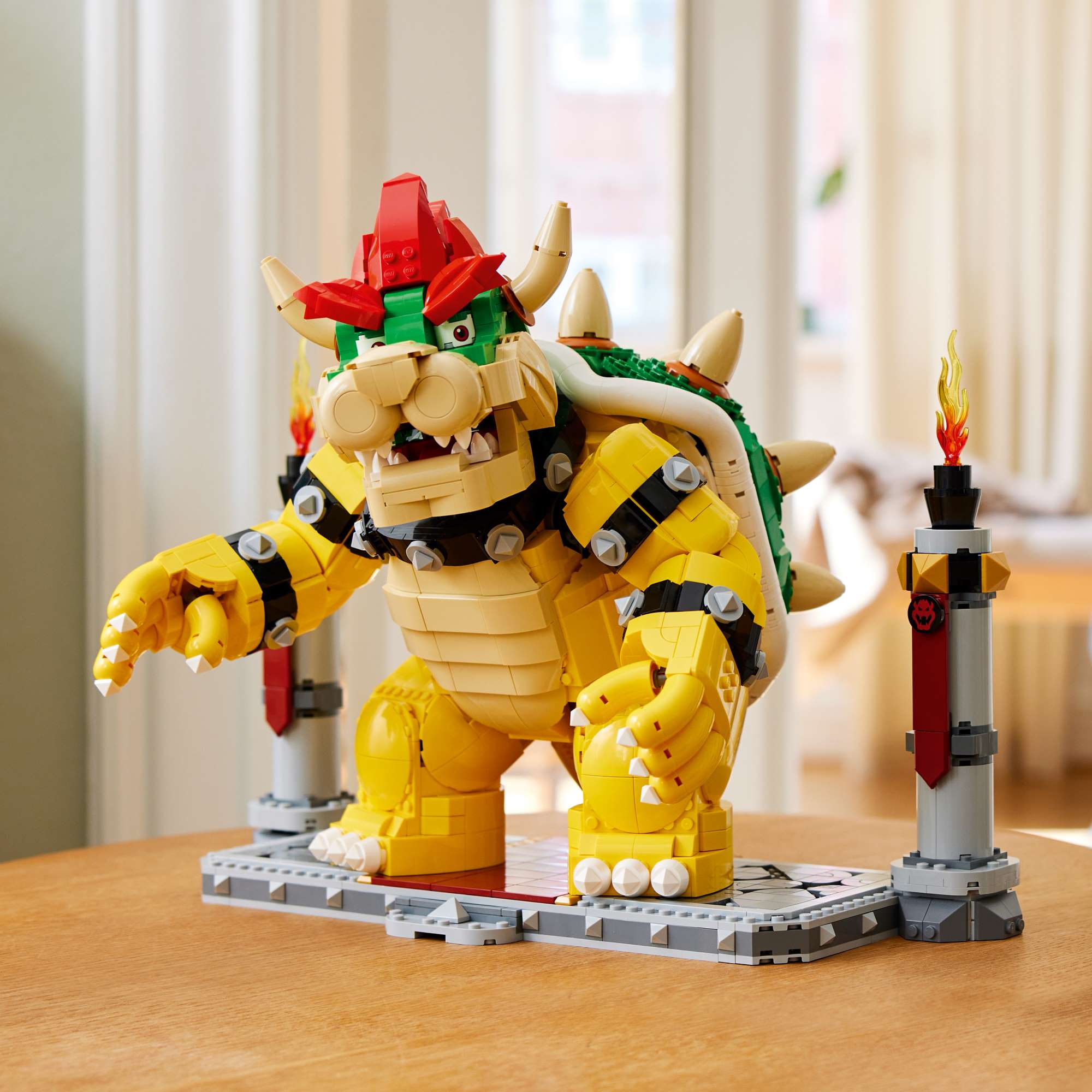 The LEGO Bowser is 29 cm high and thus takes on gigantic proportions that put the previous LEGO Bowser model in the shade. To give you a better idea of ​​the size, we have digitally placed Bowser from LEGO 71369 Bowser’s Castle next to it and also used Super Mario as a comparison. 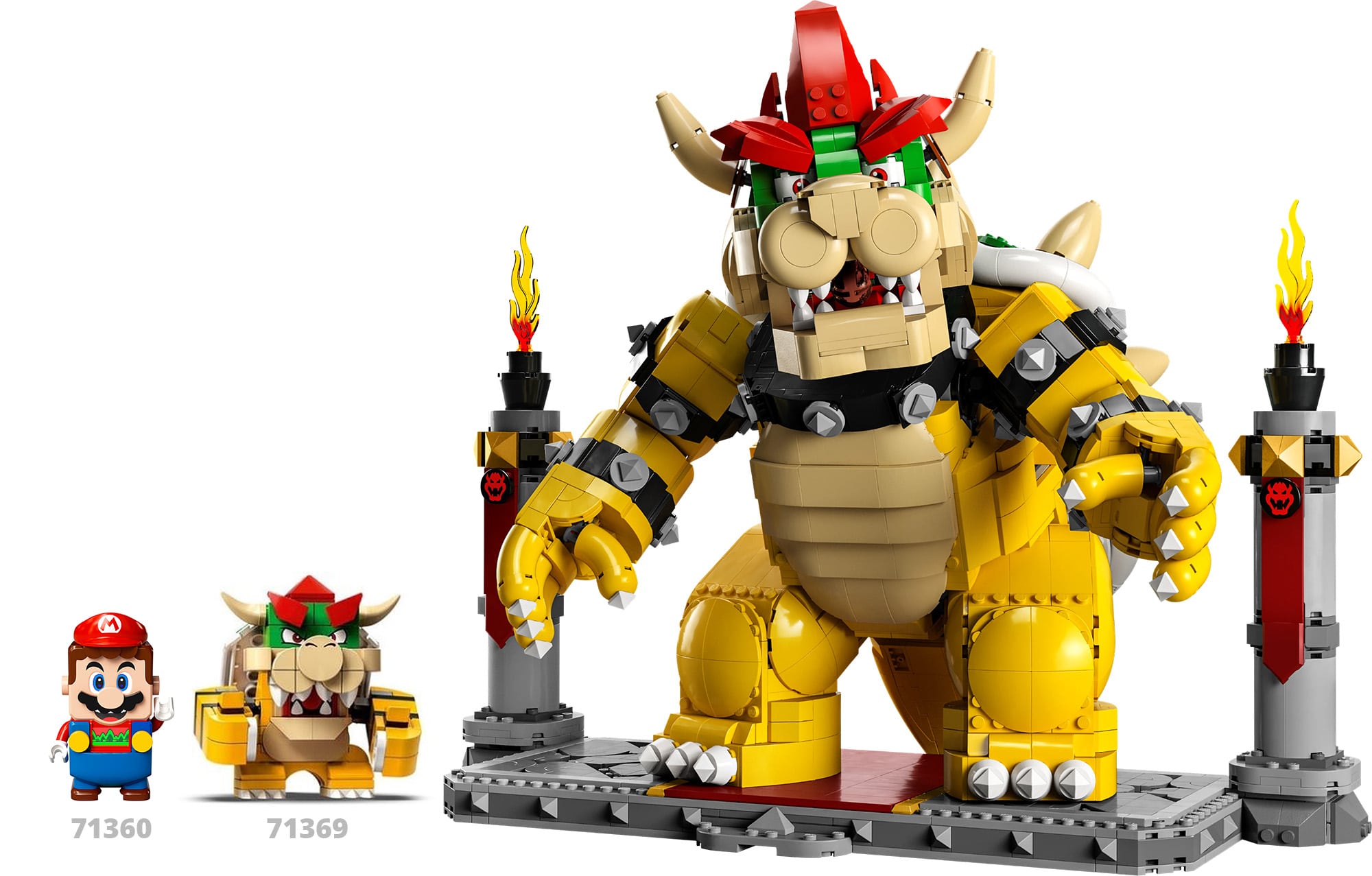 Build, play and display LEGO® Super Mario™ The Mighty Bowser (71411) set to celebrate the king of the Koopas. This figure will be built using, among other things, new-for-October 2022 LEGO elements to accurately replicate Bowser’s spikes. The model also includes a fireball shooter and a button to control the head and neck movements. His arms and fingers are also posable!

Display the mighty Bowser on the LEGO® brick dueling platform. On the platform there is a hidden POW block, a function stone and 2 towers that Bowser has to knock down. Combine The Mighty Bowser set with one of the separately available LEGO Super Mario Starter Sets (71360, 71387 or 71403) to let him duel with LEGO Mario™, LEGO Luigi™ or LEGO Peach™. The set is a great gift for any Super Mario™ fan and offers great build and play fun for the whole family. A step-by-step assembly guide will guide you through the complex construction project.

Welcome to your creative space

Look forward to more LEGO sets for adults from this collection. No matter what your heart beats for, there is already a construction project waiting for you.

Game features in the video

The LEGO Bowser also has some smaller play functions that can also be used to play with the “King of the Koopas”. Since the big Bowser is roughly the same size (depending on the game) as the electronic figures of Mario, Luigi and Peach, some duels can also be fought here according to the product description. It also includes a POW block and function brick, as well as 2 towers for LEGO Bowser to knock over.

LEGO has just published a YouTube video about the functions of Bowser and the set in general, which runs for more than three minutes and presents the features of the set and shows some cool details of the statue:

New parts in the Bowser

In order to reproduce the round forms of the mighty Bowser as well as possible, some parts in new colors are used. We discovered the following: 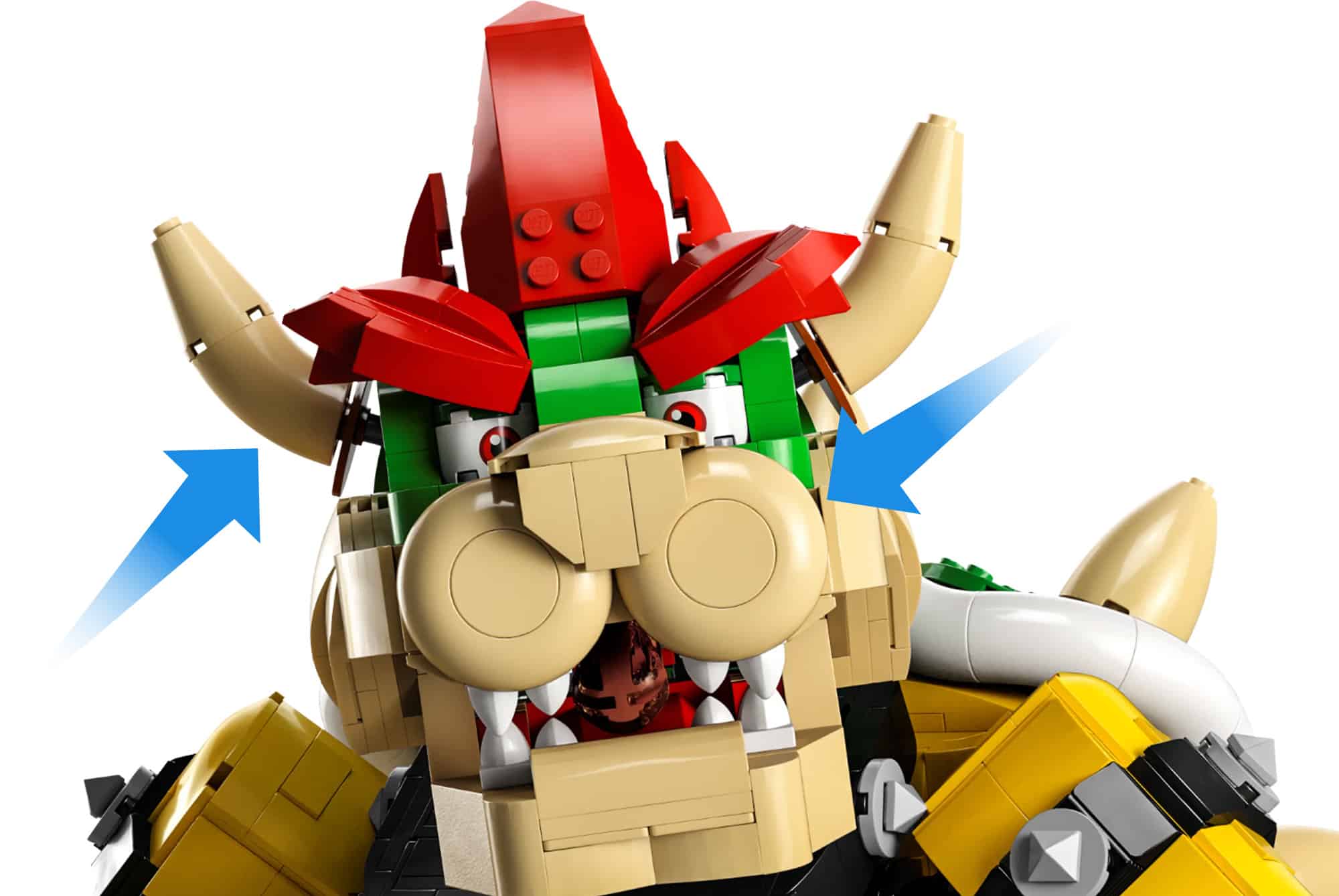 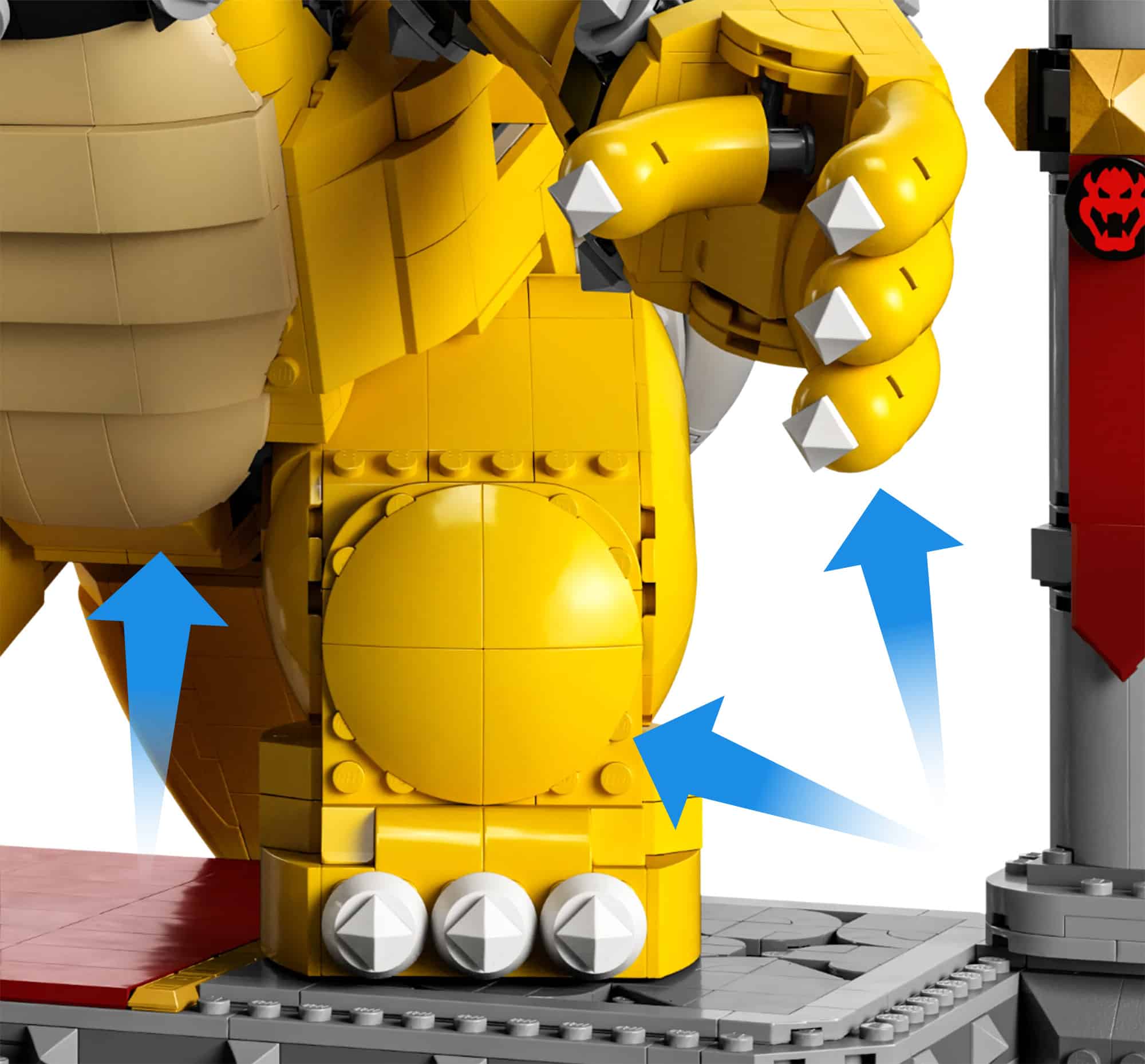 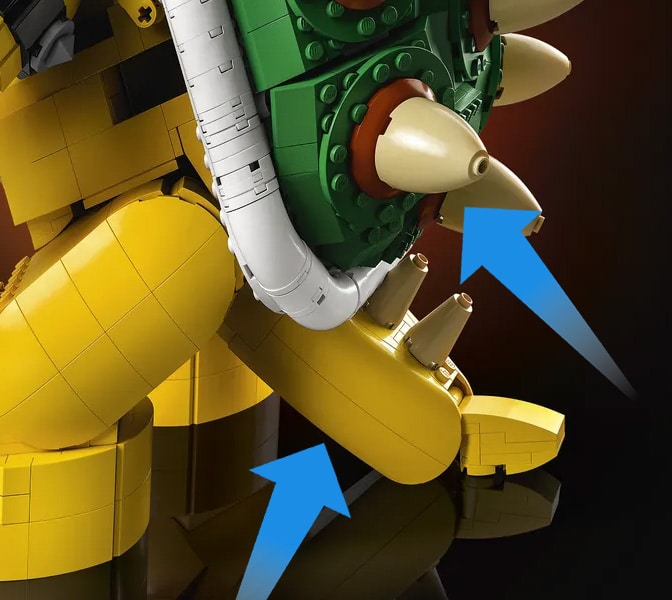 Of course, we also want to know from you what you think of this huge set and whether you are planning to buy the LEGO Bowser. Feel free to take part in our two surveys!

Since the presentation of the set was very surprising and without any announcement, our presentation article today is unfortunately much shorter than usual, although we are working on adding other important information. In the meantime you can have a look at the pictures of the new set.

At first glance, however, the set seems to have been extremely successful and we also seem to have succeeded in the “play functions” of the huge statue. It is not really clear to us why LEGO is presenting the set, which will only be available from October, around three months before the release and reminds us of the similarly spontaneous presentation of the LEGO pickup truck (10290) in July 2021, although Bowser had at least one official press release.

What do you think of the giant LEGO Bowser? Will the set find its way into your collection, or does the statue not appeal to you? Feel free to exchange views on LEGO Super Mario 71411 The Mighty Bowser.

Are you thinking about betting on Esports Betting Malaysia matchups? If so, you might be…