With Samsung and Sky, series fans can immerse themselves deeply in exciting TV events: From July, the long-awaited third season of the successful series “Das Boot” produced by Bavaria Fiction for Sky will be available to owners of a Samsung 8K TV1 aired for the first time in stunning 8K resolution. They can enjoy the new episodes in breathtaking detail for free via Samsung TV Plus.2 Samsung offers extensive marketing activities for the TV trade to promote the current Neo QLED 8K series. 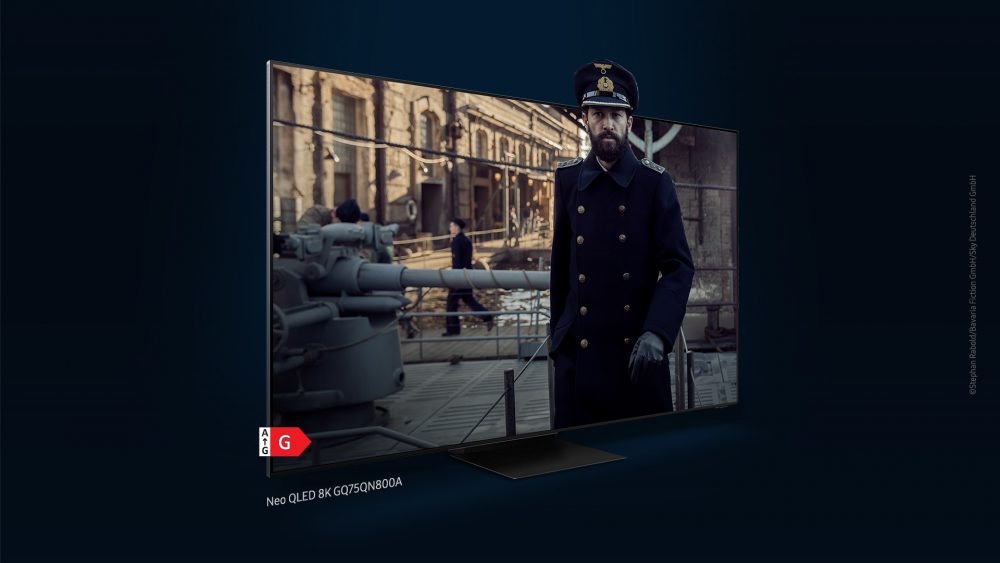 The third season of the series “Das Boot” is a big premiere for the German TV landscape: The ten new episodes are part of the first German series production that was produced natively in 8K. So that the widest possible audience can experience the impressive wealth of detail made possible by modern technology, Sky is cooperating with Samsung for the start of the season: the new “Das Boot” programs are available via Samsung TV Plus, the company’s free TV service Episodes exclusively available on Sky in original 8K resolution.

Marketing offers for the TV trade

For the TV trade, the start of the series offers a strong sales argument for the promotion of the 8K-capable Smart TVs from Samsung, especially in the well-known QLED and the new Neo QLED series. Shop displays including a Q-Symphony sound demo and other POS materials are available. In addition, the QN800B is part of the current SuperHelden cashback campaign.3

“As a pioneer of 8K technology, Samsung is making an important contribution and enabling TV audiences to enjoy high-resolution picture quality,” says Mike Henkelmann, Director Marketing Consumer Electronics at Samsung. “As part of the new season of ‘Das Boot’, we are therefore offering retailers attractive promotional options in order to target those interested in 8K in their passion for series and to convince them of the features of our new TVs.”

Ahoy 8K – thanks to Samsung TV Plus

The free streaming service Samsung TV Plus2via which the 8K version of the new “Das Boot” season can be accessed exclusively, is pre-installed on all Samsung Smart TVs from model year 2016 and is also available on mobile devices.4 Samsung TV Plus offers instant access to news, sports, series, movies and much more content – without registrations, credit cards, subscriptions or additional services.

Benedikt Frey, Country Lead DACH at Samsung TV Plus, is also pleased about the cooperation with Sky for the start of the third season of the successful series “Das Boot”: “We are extremely pleased that such a well-known and excellently produced series is in its third season on our Samsung Offer TV Plus service. For our end customers, this is an extraordinary experience – 8K in the living room on our latest TVs. For Samsung TV Plus in the DACH market, this development is another milestone in offering our users great content for free.”

Gus Grimaldi, Head of Product for Samsung Europe, highlights: “Samsung strives to constantly evolve its streaming services through the combination of exciting content and display technologies. As a result of these efforts, today we are proud to bring stunning 8K content to Samsung TV Plus users.”

Frank Jastfelder, Director Original Productions scripted at Sky, adds: “We are really looking forward to the third season of ‘Das Boot’ setting sail again this year. Presenting the viewers with a breathtaking, visually captivating and grippingly staged high-end production not only in UHD, but also with 8K technology in the best possible picture and sound quality is logically consistent and we are thrilled that we are Samsung as partners.”

Samsung has been involved in the development of the new TV technology since the first QLED 8K in 2018. 8K refers to the extremely high image resolution of 7,680 by 4,320 pixels, which totals over 33 million pixels. These ensure that even the smallest details can be finely resolved and sharply displayed, even on large TVs. This means that the resolution of an 8K TV is four times higher than that of 4K UHD TVs and even 16 times higher than that of Full HD TVs. In order to also display lower-resolution content at 8K level, Samsung uses its own 8K AI upscaling technology. A Quantum AI processor can also be used to upscale 4K or HD content to 8K. This makes the TV experience vivid and immersive – the audience can immerse themselves deeply in the film world. With the cooperation between Samsung and Sky on the occasion of the third “Das Boot” season, Samsung is now opening a new chapter in its TV offering: a true blockbuster series in native 8K.

2 The series can only be broadcast in 8K resolution on Samsung 8K TV sets from model year 2020 via the Samsung TV Plus app. An internet connection of at least 40 Mbit per second is required.