On the night of Friday, the Ideas community chose the “Terraria” draft as the 26th candidate in the 2nd review of 2022. The review board in Billund will have until September to study the rules. Then the detailed assessment will start and a decision for the production release will be made. We will introduce you to all the details.

The draft was uploaded by JaoGosma. We weren’t able to find out anything about the person, so we’re doing a little research on the Ideas appearance. The account was opened on the day of the 90th Anniversary Set Vote, which is January 18, 2021, and soon came to life. So far, the contributions to activities, contests and “normal” ideas drafts have received little attention. In addition to the current design, another model has so far exceeded the limit of 1,000 votes.

The Terraria model was presented to the Ideas community on January 28, 2022 and garnered around 1,000 votes in the first month. In mid-April 2022, the model already had 5,000 supporters and counting 153 days the draft was raised over the magic threshold for review. The crucial support came from the YouTube channel Chippygaming, which presents the model to its million followers. JaoGosma can’t care. The first entry in the “10k Member Club” should be cause for celebration.

Let’s take a closer look at the model: The open-world computer game Terraria, which was released in 2011, serves as a model for the design. We see a scene coming out about 1,970 parts consists and with two minifigures was planned. From the description we learn that the model consists of a house with two floors, plus a basement, a pond and a small cave.

The cave is divided into two sections, both of which end in an underground lake. A chest and a life crystal have also been positioned on the right side. As in the gaming template, the model is designed for a 2D look and has a depth of six nubs. The design is built in a confined space in height. We cannot judge whether the construction technology could have an influence on the stability. Based on the pictures, we estimate the dimensions including the base to be approx. 38 cm wide, 6 cm deep and around 40 cm high. 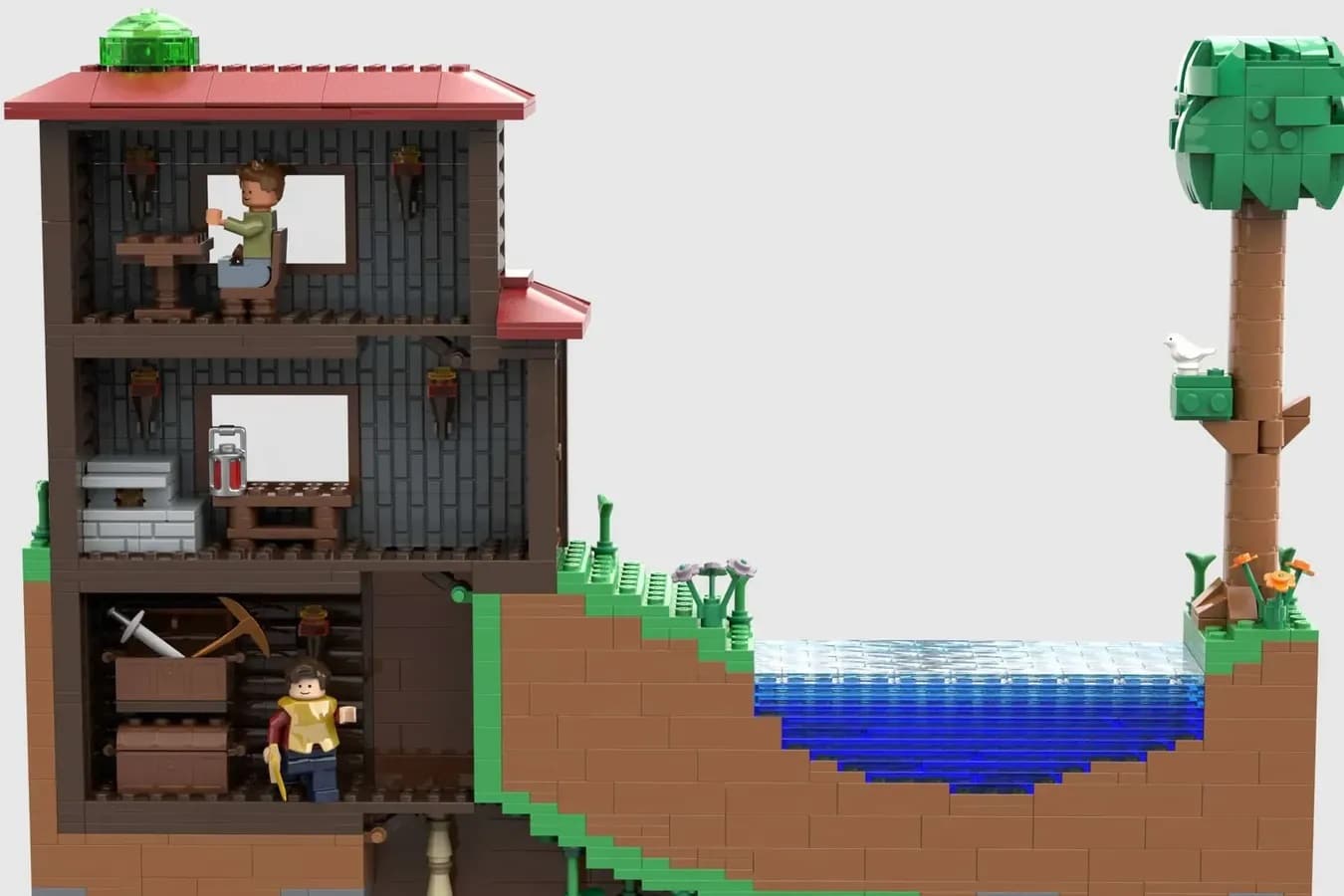 According to Wikipedia, the open-world game Terraria was released in 2011 under the name “Re-Logic” and was initially distributed via the Steam portal. It is kept in a 2D graphic, but sometimes a third dimension is also used. Over 200,000 units were sold in nine days. The game even topped the sales rankings. In early 2012, the developers put further updates on hold, but in spring 2013 asked the community to submit suggestions for the sequel. The game was also released for the XBox and the Play-Station network almost at the same time.

In April 2020, the game could already look back on around 30 million units sold and is available on the largest systems. The trade press gave the title consistently good ratings. To give you a brief impression of the game, we have selected the Switch Release Trailer 2019 for you. 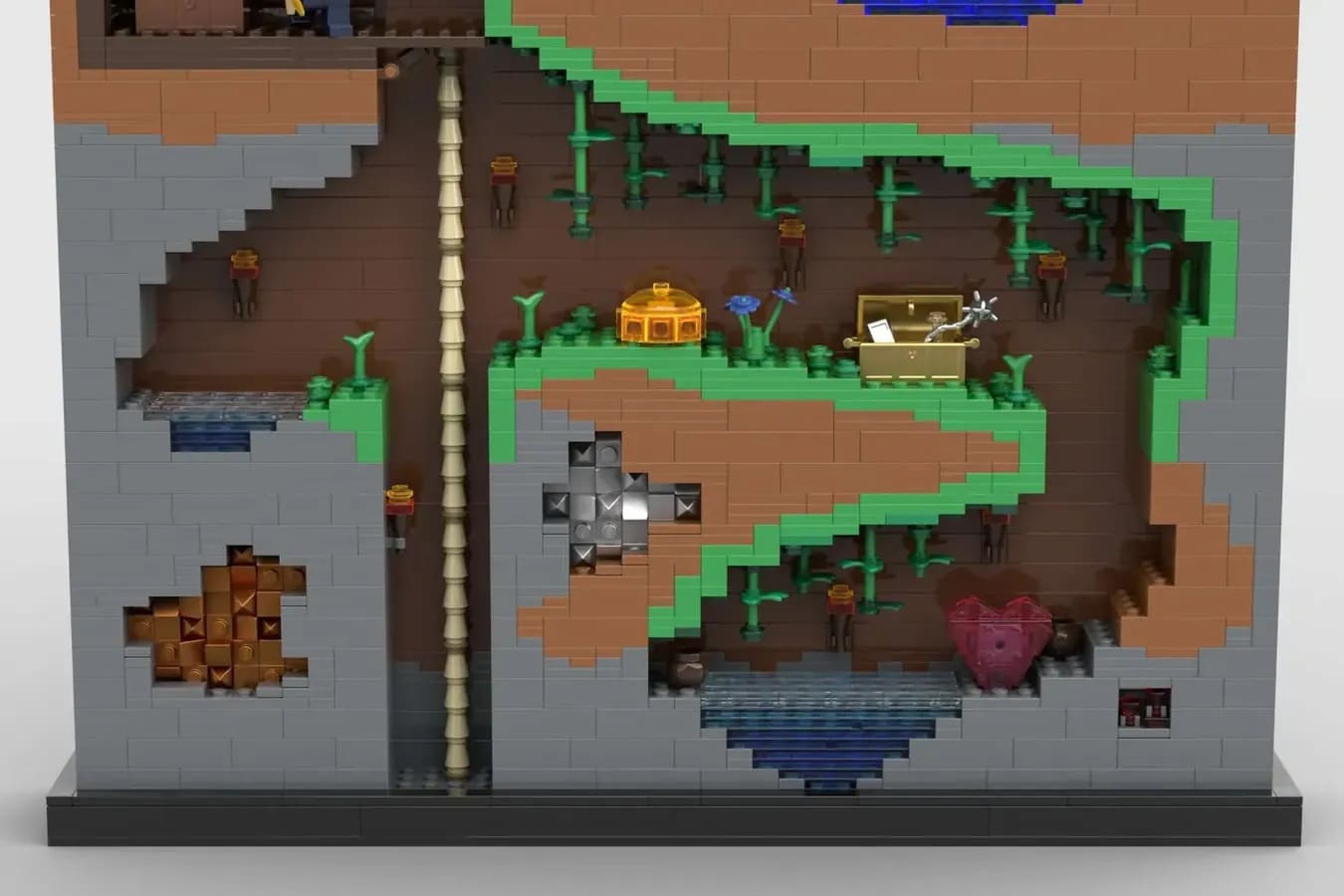 These ideas want to convince in the 2nd review 2022:

It might surprise you a bit, but the title didn’t mean anything to me until today. In terms of content, I therefore do not want to comment on the implementation. Personally, the high-stacked façade doesn’t particularly appeal to me. I also wonder if the model would pass a stability test. Since I have no reference points, I would refrain from a possible purchase.

We now want to ask ourselves how LEGO might evaluate the design. Looking through the Ideas archive, we quickly find some designs related to a video game. Recent examples include the Untitled Goose Game, Among Us, the Fall Guys or Animal Crossing. All proposals were rejected in Billund. In addition, Legend of Zelda had several unsuccessful attempts.

At this point we don’t want to forget that the independent series LEGO Minecraft found its origin in Ideas. Minecraft even held the Ideas speed record for a long time. The corresponding draft only needed two days to break through the review limit. The LEGO 21102 Minecraft Micro World was released in June 2012 and the LEGO Minecraft series started in autumn 2013. In addition, since January 2022 we can buy the LEGO Ideas 21331 Sonic the Hedgehog.

In the LEGO range we can discover some sets related to video games. In addition to the evergreen Minecraft, LEGO tried its hand at Overwatch in 2019 and has been listing the independent LEGO Super Mario division since 2020, which was one of the most successful toys in North America in the year it was released. In April 2022, the Danes underlined that LEGO has further ambitions in the computer game segment, when KIRKBI and Sony announced that they would each invest around 1 billion US dollars in Epic Games.

According to Wikipedia, Terraria is one of the TOP 10 best-selling video games. This is also supported by the searches on Google. The 2D open world is roughly on par with “Sonic the Hegdehog” and is known around the world. On Twitch we have to search a little longer before we discover the title. The game is currently listed there at the end of the TOP 100 most streamed game plays.

The design is intended to serve primarily as a display model. The playability is limited, but the set could find its place on shelves or in a showcase due to the very narrow design. Ideas has proven time and time again that major modifications can be made to make a design marketable. A possible sales potential is given by the large fan community. If the model doesn’t interfere with the in-house plans and doesn’t overlap with the company’s two lines, implementation could well be possible.

What do you say about the model? Do you know the computer game or is it new territory for you? How are the game scenes implemented? Can you recognize the game or would you improve something? Does the display model appeal to you or do you miss further play options? How do you rate the chances? Write us your opinion in the comments.

2022 trends to watch out for in the industrial cybersecurity industry