Climate experts hired by the United Nations are set to release what they claim to be the definitive guide to “stopping global warming” in a report on Monday, which will direct how societies and economies must transform to ensure a “livable” future.

The United Nations Intergovernmental Panel on Climate Change (IPCC) is responsible for the publication, which aims to shape the global climate response in the wake of the coronavirus pandemic.

AFP reports that earlier this year the IPCC released the first two parts of a trilogy of mammoth scientific assessments of how greenhouse gas pollution is expected to warm the planet and what that means for life on Earth.

This third report will set out what to do about it.

It comes just days after UN Secretary-General Antonio Guterres appointed a panel led by Canada’s former environment minister to ensure private companies comply with climate guidelines, with “every company, every investor, every city, every state and every region” targeted by the globalist body like Breitbart to comply, news reports.

“Governments have the lion’s share of the responsibility to reach net-zero emissions by mid-century,” Guterres said on Friday announcing the plan, adding that this applies particularly to the group of Big 20 emerging and developed economies , which accounts for 80 percent of emissions. 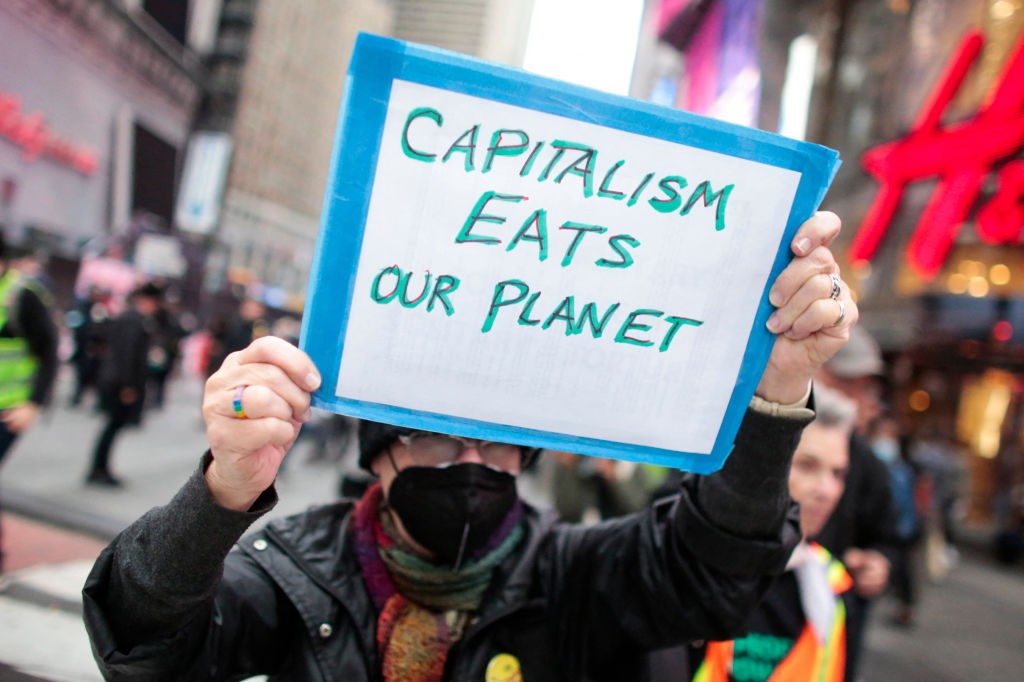 A protester holds a sign that reads “Capitalism is eating our planet” during the March for Climate Justice November 13, 2021 in New York. UN chief Antonio Guterres said the world still stands on the precipice of “disaster” after nations on Saturday reached a global climate deal that fell short of what science says to curb dangerous warming. (KENA BETANCUR/AFP via Getty Images)

Two weeks of negotiations are now being released, according to AFP, in which nearly 200 nations struggled to produce line by line a high-level “summary for policymakers” that distills the hundreds of pages of the underlying assessment.

This meeting was supposed to conclude on Friday but dragged on over the weekend.

The IPCC assessment was originally scheduled to be released on Monday at 09:00 GMT but will now be released at 15:00 GMT.

The report’s main focus is on weaning the global economy off fossil fuels and transitioning to low-carbon or zero-carbon energy sources, from solar and wind to nuclear, hydroelectric and hydrogen.

The report’s findings will feed into the UN political negotiations, which will continue at COP27 in Egypt in November.